skip to main | skip to sidebar

Interview with Hito Steyerl, director of the wonderfully inventive experimental documentary 'NOVEMBER.' The film, using images of popular culture from 'FASTER PUSSYCAT, KILL KILL!' to 'GAME OF DEATH,' seeks to reassemble the identity of Andrea Wolf, Steyerl's childhood friend who joined Kurdish guerrillas in Turkey and was killed as a terrorist in 1998. The film manages to be both personal and profound, an outstanding indictment of the modern construction of identity, history and the documentary and a meditation on the circular relationship between fiction and reality in modern media.
This is what documentary films should feel like.

One of those rare gems of the horror genre that surpasses all expectations. A beautifully operatic psychological thriller along the lines of "The Shining" and Argento's best films. Not to be missed. Trailer below (sorry about the volume). 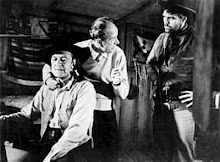